How To Create Google Direction Map Shortcode In WordPress

This article would explain how to create a short-code to display Google Direction Map and to use shortcode anywhere in posts/pages or in text widget with zero effort. A WordPress-specific code that lets you do nifty things with very little effort is “shortcode“. Shortcodes can embed files or create objects that would normally require lots of complicated, ugly code in just one line. Shortcode = shortcut (source). Shortcodes can be used in page/post content or in text widget. When non-technical user is managing a site, then shortcodes are the ultimate help. Non technical user can add/remove page front-end look with the help of shortcodes.

To display Map on HTML pages, its Map Script is as follows:

HTML for Google Map and inputs for Google Direction Map are as follows:

Now, review the code and find the line listed below in Google Script code:

Here $lat> and $long> are the two variables that are used to display user current position on map ($lat for latitude and $long> for longitude).

The function calcRoute()> is used to calculate the route distance or direction from your address to new address given by the user.

This input is used to get the Ending Address (Destination Address) from user.

Conversion Of Code To WordPress ‘shortcode’:

The function pt_google_map_function() has one argument name $atts which contains the extra information given when the shortcode is being used. In our case, we will pass latitude and longitude. Our final code will be like this:

How To Use ‘shortcode’ In Content Area or Posts/Pages: 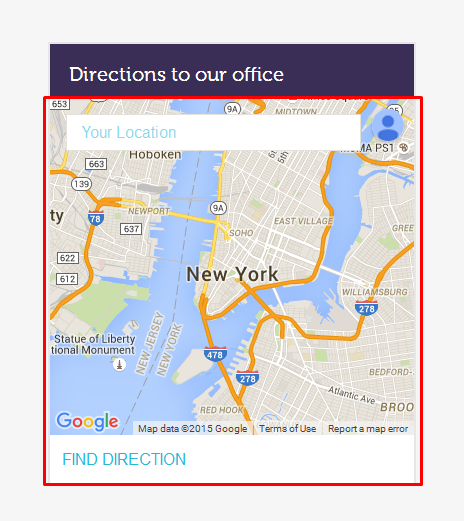